History of the Labrador Retriever 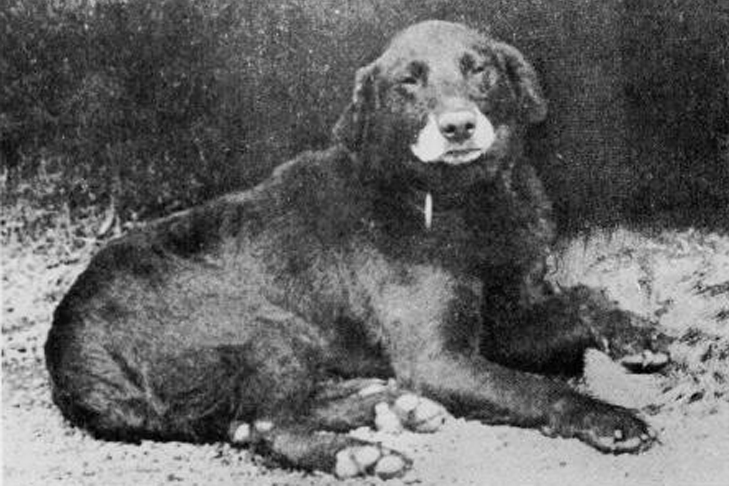 It’s widely believed that human settlers in the late 1500 brought working dogs along with them to Newfoundland, to help with tasks in hunting and fishing.

Through ad-hoc breeding of these early settlers’ dogs, likely a random mix of working dog breeds from the British Isles and Portugal, a couple of different Canadian working water dog breeds were developed:

The ancestors of the Labrador Retrievers today originated from Newfoundland and Labrador which is a region in Canada’s north. Newfoundland was discovered by traders from Bristol in 1494 and a few years later the Bristol Company established settlement on the new land.  Newfoundland’s fishing industry grew and soon other European countries started fishing in the cold waters of Newfoundland.

The St Hubert’s Hound was also known as the Lesser Newfoundland which evolved into St John’s dog. It is believed that the St John’s dog descended from the large, long haired Newfoundland dog. Short hair was preferred because the long hair started to freeze while the dogs were coming out of the cold waters. St John’s dogs had a short and oily double coat that repelled the water and kept them warm. This was very useful as the dog assisted the fishermen in hauling fish nets, retrieving fish, pulling ropes from boat to boat and even pulling boats, all this in icy cold water.

They quickly became widely popular as a result of their love for retrieving and the water but also trainability, endurance, excellent temperament and loyalty.

The Earl of Malmesbury and the Modern Labrador Retriever

In the early19th century St John’s dogs were imported into England by an English aristocrat, the 2nd Earl of Malmesbury and he soon fell in love with the Labrador and dedicated all his breeding efforts to the breed. He trained them for duck hunting on his estate. A few years later he donated some of his dogs to the 5th and 6th Duke of Buccleuch in Scotland who then started breeding Labradors.

This breeding program is considered to be the starting point of the  today’s Labrador Retriever breed.

In England they named the St John’s dogs Labrador dogs, this because the dogs were retrieving in the cold waters of the Labrador Sea in North America.

The Extinction of the St John’s Dog in Newfoundland

Two factors contributed to the extinction of the St John’s dog. To encourage sheep raising, the Governor decided that there could be no more than one dog per family. A few years later a heavy tax rate for dog ownership was introduced, the tax rate for females being higher than the one for  males. This was followed by many female pups being destroyed at birth and had a great impact on the population of the St John’s dog as there were not as many of them in Newfoundland.

The 6th Duke of Buccleuch was able to import a couple of more dogs despite the fact that they had to be quarantined for six full months. The breeding stock in Newfoundland became lesser and the numbers went down over the next years. The last two male St John’s dogs died in early 1980 at a very old age after having lived in a very remote area.

Wolters indicated in his book that this is the earliest photograph of a female Labrador Retriever and was taken in 1867 (Nell is 12 years old here. Nell was owned by the Earl of Home (1799-1881)).

This (St. John’s) dog was part of the breeding stock for the Labrador and had white feet and a white muzzle.  This trait was noted in some other Labradors being bred in the 1800’s in England.

Today the breed standard prefers no white in the coat colour.  Sometimes as the present day Labrador ages you will notice that areas that gray tend to be the paws and muzzle. Perhaps a leftover of the St. John’s Dog?

Extinction of the St. Johns Dog in Newfoundland

In Newfoundland the St. John’s dog eventually became extinct.  The reasons seem to be political.  In 1780 the Governor wanted to encourage sheep raising and to stop any menace to sheep he ordered that there could be no more than one dog for a family.  The St. John’s dog were native to Newfoundland and so all but the ones that had been exported to England were vulnerable to this order. This action had a great impact on St. John’s dogs since they were not wide spread and now their numbers were being discouraged in their homeland.  Later, in 1885 another measure was taken by the legislature to encourage sheep breeding.  A heavy license was imposed on dogs.  There was a higher tax rate on females than males which lead to many female pups being destroyed at birth.  Couple this with the English passing the British Quarantine Act and it made importation next to impossible.  The Quarantine Act on 1895 prohibited dogs from entering Great Britain without a license and without first undergoing a strict six-month quarantine. Britain did not have the disease of Rabies native to their island and they did not want to have it introduced. By the 1930’s the St. John’s dog was rare in Newfoundland.

The 6th Duke of Buccleuch was finally able to import a few more dogs between 1933-1934 to continue the line. The importing of stock for breeding was severely limited. And so the St John’s Dog numbers steadily declined over the decades until it finally became extinct in the 1980s.

A fortuitous meeting of the third Earl of Malmesbury (at age 75) with the sixth Duke of Buccleuch (1831-1914) and twelfth Duke of Home (1834-1918) saved Labs from extinction.  Buccleuch and Home were visiting a sick Aunt and decided to participate in a waterfowl shoot on the South Coast. There the two men were impressed by what Malmesbury’s dogs were capable of doing.  These were the same bloodlines as their father’s kennels.  Malmesbury reported that he had keep the blood lines pure as he could with the imported dogs from Newfoundland.   Malmesbury gave them some of his dogs to carry on the breeding program.  The dogs were Ned (born 1882) and Avon (born 1885).  Many say that these two dogs are the ancestor of all British Labradors. Buccleuch Avon is said to have sired ‘liver-coloured’ pups. This would be the ancestor of most American Field Champion chocolate line or chocolate gene carriers line.

To the right are two of the last St. John’s dogs in Newfoundland.  Author Richard Wolters indicated in his book The Labrador Retriever that these two males survived extinction because they were in a very remote area.  There were no female dogs left to breed to, so these appear to have been the last two original St. John’s dogs.  Wolters’ book was published in 1981 and at that time Lassie (on the right) was 13 years old and his brother (left) was 15 years old.

Note these dogs also have the white toes and muzzle like the early Labradors in England.  This trait appears to have been bred out of the dogs since the only white markings AKC  allows at this time is perhaps a small white spot on the chest.  Sometimes one will find some white hairs on the toes or foot pads still today. That likely traces to the original dogs.  Often Labs will have their faces and toes get white as they age as well.

How the breed became known as the Labrador Retriever

It is not entirely known how or when the term ‘Labrador Retriever’ was coined, although the Earl of Malmesbury was known to use the phrase himself. In a letter found by him from 1887, he wrote:

‘We always call mine Labrador dogs and I have kept the breed as pure as I could from the first I had from Poole’. The real breed may be known by their having a close coat which turns the water off like oil and, above all, a tail like an otter.’

Todays’ breed standard has 3 official colours, yellow, chocolate and black. Black being the most successful in show and trials, yellow being the most used as police and service dogs, and chocolate as being the rarest but with rapidly increasing numbers. All three colours can appear in one litter.

This was not always like that, the 3 coat colours only gained acceptance amongst the breeding world in the 20th century. Before that, newborn puppies carrying another coat colour than black were often killed at birth and the ones not killed were not used as breeding stock.

In the later part of the nineteenth and early twentieth centuries the American Sportsman used setters and pointers to hunt large areas and heavy cover. The driven bird shoots of Britain were unusual situations for Americans. The British driven shoots included walking at heel, marking game down and to track and retrieve it. The British style of hunting was different than the American hunter. The American terrain, size of the hunting areas, cover, different types of land called for a different more demanding kind of dog work. Americans liked to use Springer Spaniels as game finders for upland work.  The Chesapeake Bay Retrievers had been developed as water retrieving dogs and recognized by the AKC in 1878.  Americans began taking an interest once they realized Labradors were as good as Springer Spaniels for putting up game and as good as a Chesapeake as a water dog – some say better because its coat does not tend to ice up and it repels water well.  This dog had the combined skills of two other popular sporting dogs in America making it a very versatile all around sporting dog plus it had an excellent disposition.  The breed became popular in America during the ‘roaring twenties’ and increased after the end of WWII.

Official Recognition in the UK and US

These two events were crucial for the future of the Labrador Retriever. Without a breed having official recognition and a standard set for them, the blood lines aren’t kept pure and the breed almost certainly gets diluted through crossbreeding and becomes lost.

The first Labradors arrived in Australia in 1929, they where imported by the Liddy kennels in the UK and included a black dog and 2 black bitches. From these 3 dogs a serious breeding program began and the ever rising popularity of the Labrador in Australia.

Labrador Retriever history can be traced right back to the cross-breeding of working dogs by early settlers of the island of Newfoundland in the 1500s. From these humble beginnings, a very loyal and hard-working water dog, the St. Johns Dog was developed.

Due to political pressures both in England and in Canada, the pure St Johns Dog became extinct. But in England, two noble families who had fallen in love with the breed, had dedicated their kennels breeding programs to maintaining as pure a line of Labradors as possible.

We owe a special debt of thanks to the families of the Dukes of Buccleuch and the Earls of Malmesbury, the first to fully appreciate the beautiful qualities of the Labrador Retriever and without whom, the breed would have been in danger of extinction.

They put in an enormous effort into keeping the breed going and to keep it pure. It is because of their passion, dedication and breeding programs that we have the Labrador Retriever for us to enjoy today.